As most of you know, my daughter Marie died by suicide in 2009. I believe in an all merciful God who loves my daughter even more than I ever could. I trust in Him and I know that my Marie is with Him.

However, I knew that our whole family and especially Marie’s little sister Joy would especially miss her when Joy was planning her wedding this year.

I don’t usually pray for something personal except for help with more wisdom, patience, etc. but  Joy and Marie were especially close and Joy had been Marie’s maid of honor in 2005. The two of them even lived together for the last few months of Marie’s life.

When Joy was younger, the three of us would often talk about Joy’s possible future wedding  and Marie would tease Joy about probably becoming a” bridezilla”. Marie promised that she would personally keep her little sister in line if that happened.

So I knew that there could be a shadow over Joy’s happiness at her wedding and I prayed for a sign that Marie was at peace.

However, I was totally stunned when, the week before Joy’s wedding, a package came from Kentucky with a carefully wrapped, thirty year old letter inside. The package was from  Marie’s older but then close friend Stephanie who had moved away in 1983.

Stephanie wrote that she just happened to find a letter Marie had written to her at age 7 and had to send it to me. The letter was even typewritten! Who knew that Marie could figure out a typewriter?

The letter contained a lot of spelling mistakes but it was hilarious to read Marie’s description of her life at age 7. Marie even wrote down each family member’s age which told us how old she was at the time. (See photo: Marie’s letter at age 7 to Stephanie)

Marie wrote about how her older brother was nice and mean sometimes. Marie also wrote about her little sister Joy and how she ate a “dede” bug. All I could do was smile.

What a wonderful wedding present for Joy and all of us!  At the wedding, we all felt that Marie was there and celebrating with us.

As my late mother often used to say, “God is good!”

Here is the proof: 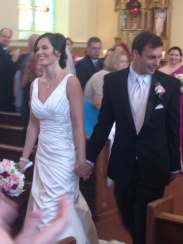 2 thoughts on “A Surprise Wedding Present”